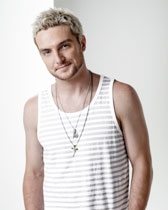 Best known for his role as Wade in the movie You Got Served, Chris Jones began his dance career early in life at the age of two.  He immediately showed a love for performing in regionally staged musicals and competed in numerous dance competitions around the country.  At age 10 he was offered roles in the Broadway touring companies of "Camelot" and "The Secret Garden.”

Eventually his acting career blossomed and placed him in the CBS television series pilot "Nathon Dixon" and multiple movies such as Forrest Gump, O, Stolen Memories Secrets Of The Rose Garden, Holy Joe, This World Then The Fireworks, Tad, and many more.  Following high school he moved with his family to Los Angeles to pursue a professional career in acting, dance, and singing.

Since moving to Hollywood, Chris has toured with and danced in television and music videos for numerous recording artists including P. Diddy and Busta Rhymes, J.Lo, Dream, Beyonce, Britney Spears, Shorty 101, Willa Ford, 98Degrees, N’SYNC, Destiny’s Child, and Jessica Simpson.  He has also danced in industrials for companies like Sketchers, Adidas, Nike, DeBeers Diamonds, Sony and INTEL and in commercials for Pepsi, Panasonic, McDonalds, Foot Locker and more.

Chris has a number of television credits as well that include "CSI-Miami", “CSI-NY”, "Malcolm In The Middle", "American Dreams”, "Six Feet Under", "Will and Grace", "Judging Amy", "Mad TV", "The Drew Carey Show", and "Days Of Our Lives".  Chris is currently choreographing for Adidas, NLT, Travis Garland and One Call who toured with Britney Spears.

In addition to You Got Served, Chris has had starring roles in the feature films Lost In Plain View, Big Momma's House 2, and Steppin: The Movie.  He is now awaiting the release of two new major motion pictures in which he plays a leading role.  The first, The Helpers, is a horror film scheduled to release in late 2011.  The second film is the sequel toYou Got Served entitled Battlefield America and is scheduled to release in February of 2012.  He is currently in pre-production to choreograph for one of Lifetime Network’s newest movies of the week.  Chris Jones is a true triple threat that is proud to share his talents with the world and feels honored to be a part of the Co. Dance faculty and family.

We thank our friends at BettingSitesUSA.net for supporting this site. Visit bettingsitesusa.net for reviews of the best USA betting sites.